I learned about CCSVI in late October, 2009 and discovered the CCSVI forum on ThisIsMS.com. I didn't sleep the first night I heard about the CCSVI theory. I was awake, tossing, turning, wondering. It seemed there was something to this new idea. I've been hooked ever since, following the forums and Facebook pages on a daily basis. When Buffalo Neuroimaging Analysis Center offered a self-pay testing program for CCSVI, I decided to take advantage of it. I was there last week, and this is my story!

My husband and I flew to Buffalo on Sunday evening. We flew in a day early, and spent a day and a night at Niagara Falls. We had both been there before, but it was great to see the falls again. We stayed on the Canadian side at the Marriott Fallsview,with a (yes, it's obvious from the name but I have to say it) great view of the falls! We were able to get a reasonable rate with a 1 night package that included breakfast, dinner, 2 tickets to the SkyWheel and a free shuttle between the two casinos and the hotel. If you go to Buffalo and have never seen Niagara Falls, you should go. Here's the view from our room on the 12th floor: 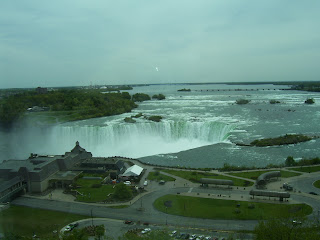 On Monday evening we headed to Buffalo. We stayed at the Doubletree which is right across High Street from the BNAC/JNI location, which is at Buffalo General Hospital. If you go to BNAC (which I learned is prounounced Bee-Nack, not Bee En A Cee…) and want to stay at the Doubletree, make sure to call the reservations number and ask for the Buffalo General rate. The Doubletree has a great staff, free internet, chocolate chip cookies at night, a café downstairs for food (Au Bon Pain) and is just ridiculously close to BNAC. There is also a computer with printer for guest use (great for printing boarding passes for the return trip) and they were willing to send a fax for us at no charge. (Yes, in this day of e-everything and scan and email, some of us still need to send a fax!) Anyway, back to the Doubletree - you can't beat the location. It was great to just head across the street and be back at my room in between tests.

On Tuesday morning I went to the main entrance of the hospital and was escorted up to the 2nd floor. The staff was great about meeting me and escorting me to my next test. I really appreciated this! While the hospital is not large enough to get hopelessly lost, it was nice to know that someone was waiting for me and would get me to the right place on time. After a bit of paperwork, I was off to the tube!

The MRI staff was great. I asked the tech to talk me through the sequences. I like to know where I am in that 1-1/2 hours of testing! You know the drill, right? I don't sleep in the tube, so I'd rather hear the "Ok, Pam - the next sequence is about 9 minutes" and then do the math to know how much longer I've got. I survived the 1-1/2 hours with nary a leg twitch until she said the magic words, "OK, Pam - you're done. I'll be right in to get you out," and BAM - the left leg jumped. Funny, eh? (I learned that in Canada!)

The tech was excited about CCSVI research, and I could tell she was happy to be a part of it.

I’ve had several MRIs over the past 7 years – about 10 or 11 – and I found it interesting that there seemed to be some new sequences. New noises, new table shakes, new "pings." There were times when I thought… "Hmmm – I haven’t heard that before." I’m guessing that was the MRV part, as that sounded new to me. Or maybe the SWI, as they were also testing for iron deposition...

I had a break for lunch, and went back to the hotel to meet up with my husband. He had been walking around downtown Buffalo and was checking out the sights. There is some great architecture and old churches in the downtown area.

On Tuesday afternoon I had my Doppler test. I was wearing my CCSVI word cloud shirt, which I bought from Sandra’s Café Press site. Check out the CCSVI at UBC MS Clinic Facebook page for more details on how to order… Anyway, the Doppler tech was very interested in the shirt, and who knows – maybe BNAC will have their own shirt for fundraising soon???

The Doppler was quite interesting. I expected the scan of the neck, in both supine and upright positions. However, I didn’t know what made it a ‘transcranial’ Doppler. The wand is used on the cheek, in both supine and upright positions, to check the deep cerebral veins. There was a rep there from the manufacturer during my test. This is the new, bright, shiny, cool machine. I was glad to have my test done on it, and the techs were great.

Tuesday evening we went out to dinner with some of the other folks being tested. We went to the Anchor Bar, the original home of the Buffalo Wing. As a vegetarian, I didn’t try the wings, but the interior was fun, and it was good to compare notes with others going through the tests.

Wednesday morning was the Neuropsych test. I hate these. I participated in a clinical trial a few years ago that inculded these types of tests. I was the good student in school – almost straight A’s, and the thought of getting something wrong just bugs me! Anyway, that was almost 2 hours of answering questions, adding numbers, sorting cards, etc. I was tired!

I had the privilege of meeting Linda Safran while I was at BNAC. Linda is a go-getter who is the Development Director for BNAC. If you’re interested in raising money for BNAC and want to have a MStery party, you’ll likely have the pleasure of getting to know Linda. She has her work cut out for her. BNAC needs to raise a lot of money to complete this CCSVI research. I'll write another post with information about who is raising money for BNAC, and how you can get involved.

Wednesday afternoon my husband and I headed to the Buffalo and Erie County Botanical Gardens. They have a beautiful conservatory there, and we enjoyed checking out the plants. I have to admit I wilted a bit. The conservatory was warm in some wings (80+ degrees F) and we didn’t stay as long as I would have liked. Here I am in my CCSVI shirt: 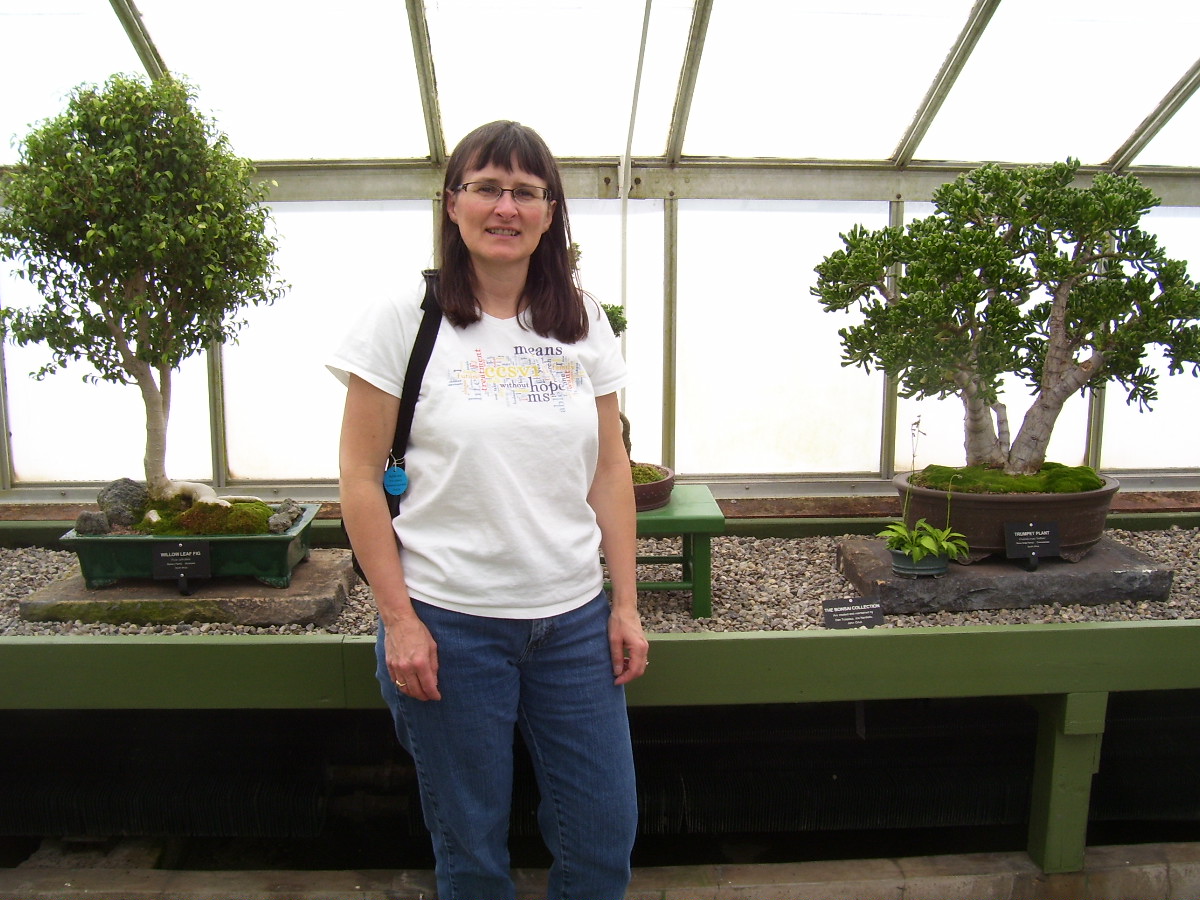 Wednesday evening I had the pleasure of helping to guard the cooler at Wobbly’s softball game. Wobbly posts on the CCSVI forum at TiMS, and he was eager to meet those of us visiting Buffalo. His real name is Bill, and he is one of the fortunate JNI patients who went to Italy to be liberated. He is a generous, funny and kind man. It was great to hear his stories and to cheer for his team. They tore up the diamond with lots of homeruns, and the game ended early (5th inning instead of 7th) because it would have just been too embarrassing for the other team to let it go on (or maybe it was in the rules???) :-) If you’re going to be in Buffalo, send a PM to Wobbly on TiMS and try to meet up. He’s a great guy and you'll enjoy meeting him.

Here's a picture of us at Stiglmeier Park, Diamond 1 - I'm 2nd from left, Bill is on the far right. 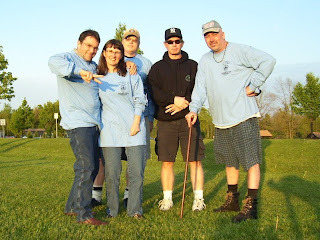 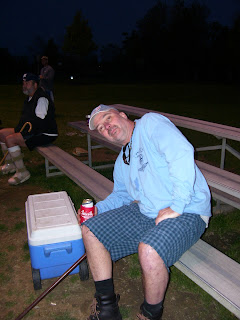 Thursday morning was absolutely nerve-wracking. I was tired, and knew that in just a few hours I would be meeting with Dr. Weinstock-Guttman to have a neurological exam and to get my results. I was so nervous I could hardly eat breakfast! Once we were in the room with Dr. W-G, I was much calmer. She is an absolute gem! Kind, caring, knowledgeable… I could go on… I wish she practiced in my town. She would certainly be my neuro. I’m amazed at how she can be involved in so much research and have a practice also! Do these doctors ever sleep???

So, on to my results.

According to Dr. W-G, I have a “beautiful” brain! (All but one of my lesions are in my spine, which isn't part of the imaging package at BNAC - heck - I can't even get my HMO to scan my spine again!) The MRV of the neck didn’t show any issues. However, the Doppler showed a slight stenosis in the right jugular, and I have an abnormal valve on the right side. In addition, I have stenosis of the deep cerebral veins. The MRI report showed better than average brain volume, but more iron deposition than average.

So, there you have it. I meet two of the five criteria for CCSVI. I know - it's OK - you can say both "I'm sorry" and "congratulations" and both are the appropriate response!

For me, it was important to know if CCSVI is an issue or not. As Cheerleader on TiMS said when many of us were discussing the BNAC results on the first 500, there is only one number that is important to each of us. I either have CCSVI (100%) or I don't (0%). I got an "A"!!!!!

There’s more to tell about the rest of the trip and my thoughts on the results, and I’ll save that for another post! 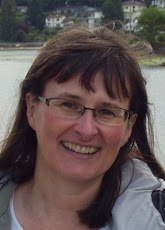